Oil Spills Along the Shore 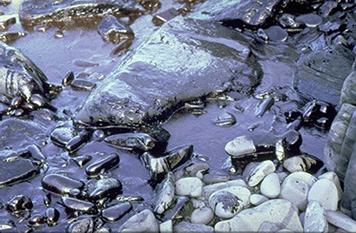 Oil spilled into the water, having been pushed by winds and currents, often reaches the shore. Oil may strand at the high tide line, leaving black lines or globs of oil on the beach as the tide recedes. Thick layers of oil may coat rocks, beaches, or plants.

On waterlogged sediments such as on mudflats, oil will remain on the mud surface if left undisturbed, and be lifted again on the next tide. Where animals have burrowed into the mud, oil may penetrate the surface through these openings.

Sun, wind, and waves will gradually weather oil that remains on the beach (cause it to change physically and chemically), forming a hard asphalt-like substance, and eventually causing it to break apart and disappear. In sheltered areas, oil may remain for a long time.

Shore creatures that are harmed by oil are either injured or killed outright. Some creatures that can hide may survive oiling, such as snails or clams that can withdraw into their shells. These animals may take up toxic parts of the oil into their bodies, through eating contaminated food. Birds that feed along the shoreline may get oil on their feathers, causing them to lose their ability to keep themselves warm, and will likely die.

Go back to the Oil Spills at the Water's Edges page.

Oil Spills at the Water Surface: Learn how oil can affect marine life at the surface of the water.

Education: For Students and Teachers: Visit the main education page to explore other ways to learn about the ocean and the impacts of pollution.

Oil Behavior and Beach Sediments: This exercise demonstrates how lighter and heavier oils behave differently when spilled onto fine-grained, medium-grained, and coarse-grained sediment.

Mapping How Sensitive the Coasts Are to Oil Spills: Learn how NOAA produces Environmental Sensitivity Index (ESI) maps to identify coastal locations, wildlife, and human use resources that may be especially vulnerable to an oil spill.

Mearns Rock: Watching Ecological Recovery from an Oil Spill: Examine a series of photographs of "Mearns Rock," a large boulder in Prince William Sound, Alaska, which was oiled but not cleaned during the 1989 Exxon Valdez oil spill, in order to learn how marine life recovers from this kind of major, one-time stress.

Oil Spill Assessment and Restoration: Find out about the steps NOAA takes to restore the environment after an oil spill in coastal and marine waters.