12. Where Are Dispersants Being Used?

People preparing spill response plans for many U. S. coastal regions now include dispersant use as a response option under certain conditions. In other parts of the world, such as in Great Britain and Europe, dispersants have become the main response technique for oil spills. Dispersant use was considered to be a major factor in reducing shoreline oiling and biological impacts at the Sea Empress oil spill in Wales in 1996. 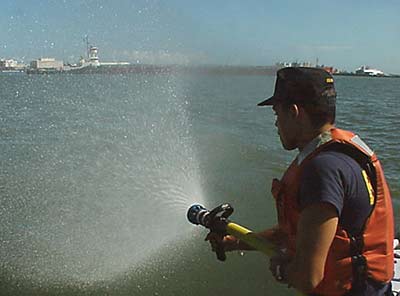 This photo was taken during a November 1999 incident in Puerto Rico, in which a grounded freighter was in danger of spilling fuel oil. Dispersants and a shipboard application system were deployed and tested, as shown at right, in case oil spilled during offloading of the ship's fuel. (Because no oil spilled, dispersants were not used at this incident).