Residues from In Situ Burning of Oil on Water 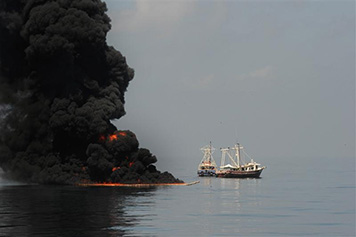 NOAA gained a great deal of knowledge about in situ burn operations during the response to the 2010 Deepwater Horizon/BP oil spill. (U.S. Coast Guard)

The small amounts of residue resulting from in situ burning (ISB) of oil on water can cause environmental concerns. This is particularly true if the residue sinks. Results of laboratory tests suggest the possibility that burn residues may sink for about 40 to 60% of crude oils worldwide. However, whether results from laboratory tests can be extrapolated to large-scale spills is not known.

Burn residues have little to no acute aquatic toxicity. Their greatest impact would likely be to the benthos (life on the ocean floor) from smothering. For most ISB applications, impacts would be very localized because of the small volumes of residues generated and their dispersal by currents.

Background and Status of Knowledge

Residues of oils burned in laboratory tests in the 1970s and 1980s floated. This is probably because of the small scale of those tests and the thinness of the burned oil. The 1991 Haven spill and subsequent in situ burn near Italy created large amounts of heated and burned oil residue which sank, stimulating research into whether residue density affects whether a residue will float or sink.

Results from larger-scale laboratory and meso-scale field tests suggest that the most important factors determining whether an ISB residue will float or sink are:

Physical properties of burn residues depend on burn efficiency and oil type. Efficient burns of heavy crudes generate brittle, solid residues (like peanut brittle). Residues from efficient burns of other crudes are described as semi-solid (like cold roofing tar). Inefficient burns generate mixtures of unburned oil, burned residues, and soot that are sticky, taffy-like, or semi-liquid.

Localized smothering of benthic habitats and fouling of fish nets and pens may be the most significant concern when semi-solid or semi-liquid residues sink. At the 1983 Honan Jade spill in South Korea, burn residue sank in two hours and adversely affected nearby crab pens [6]. All residues, whether they floated or sank, could be ingested by fish, birds, mammals, and other organisms and may also foul gills, feathers, fur, or baleen. However, these impacts would be expected to be much less severe than those manifested through exposure to a large, uncontained oil spill.

In situ burning at the 2010 Deepwater Horizon/BP oil spill played a significant role in reducing the amount of oil on the water's surface. There were 411 burn operations conducted during the course of the response that removed an estimated 250,000 barrels of oil [7]. The in situ burn operation eventually grew to include three task forces, each consisting of a three vessel ignition team, two task force vessels, one supply vessel, a safety team, and five fire boom teams. The task forces were directed to targets by spotter aircraft.

The ISB Unit developed a logistically complex process to coordinate skimming teams, dispersant operations, and in situ burn teams, keeping each clear of the others. In situ burns did not result in any injuries, and air quality testing near the burns was conducted to ensure worker safety [8]. Special considerations were also given to wildlife, especially sea turtles, during these operations.

Operations and Uncertainty in Research Information

Because of uncertainties in extrapolating laboratory results to actual spill conditions, responders cannot confidently predict the amount of residue that may be generated by burning heavy crude oils and refined products or if/how much of the residue will float or sink.

Only a very short time window is available for surface recovery of residues that eventually sink, but this recovery option could be effective, since residues are readily recovered either manually or with sorbents. Limitations include logistics, worker safety, and slow-down in ISB operations. Residues may be re-burned as more oil is collected and burned. Once the residue sinks, recovery options are few, logistics-intensive, and ineffective.

Field trials and study of actual spills where ISB is conducted are needed to determine whether or not the small-scale test data and predictive models developed to date apply to large burns. These models then should be refined.

Go back to the In Situ Burning page.