What Are Natural Oil Seeps?

Crude oil and natural gas naturally enter the ocean at areas known as "seeps." These hydrocarbons leak out of the ground through fractures and sediments, in the same way freshwater springs bring water to the surface. 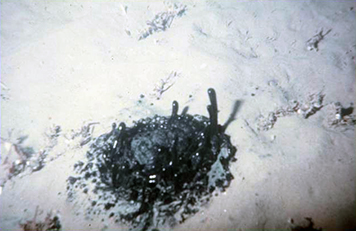 How Much Do Seeps Leak?

A 2003 report from the National Research Council estimates that, on average, approximately 160,000 tonnes of petroleum enter North American waters through natural seeps each year. The waters off southern California are one area in particular which host hundreds of known, naturally occurring oil and gas seeps. These seeps contribute about 5 million gallons of oil to the ocean annually, with wide year to year variation. They likely have been leaking for thousands of years. Although their rate of release may vary over time, the locations of seeps are consistent and predictable. Slicks from many larger seeps are visible by satellite, and some are persistent enough to be features on navigation charts. 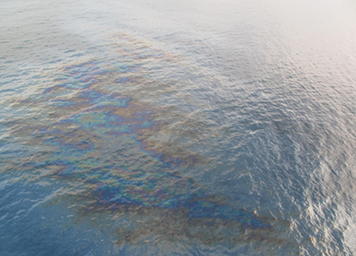 The location of oil seeps offshore remain consistent though the amount of oil they release may change over time. (NOAA)

Seep oil can vary in appearance and surface extent, depending on weather and sea conditions and flow rates. The oil from some seeps is sticky and thick, like tar; in others, it is dark and fluid, like used motor oil.

How Does Seep Oil Behave?

Oil from underwater seeps generally behaves like oil spilled during or after extraction, forming large slicks which spread and drift with winds and currents. The slicks can form miles-long lines of black, brown, and tan oil, easily observed from the air. As oil drifts away from seeps and continues to weather, it forms tarballs and mats. In southern California, for example, these may come ashore or be carried more than 100 miles up or down the coast.