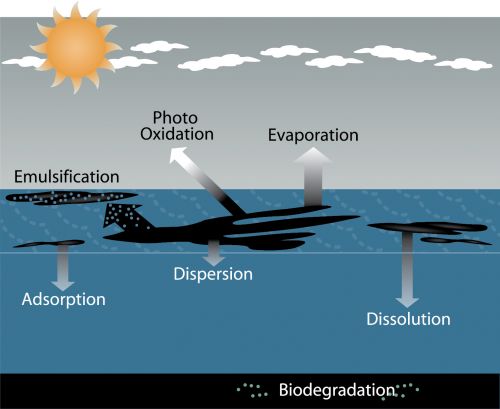 The various types of oil differ in how they weather—that is, how they chemically or physically change when exposed to the elements.

The figure at right shows the weathering processes affecting oil spills, with the referenced weathering terminology explained below.

Adsorption (sedimentation): The process by which one substance is attracted to and adheres to the surface of another substance without actually penetrating its internal structure.

Biodegradation: The degradation of substances resulting from their use as food energy sources by certain micro-organisms including bacteria, fungi, and yeasts.

Dispersion: The distribution of spilled oil into the upper layers of the water column by natural wave action or application of chemical dispersants.

Dissolution: The act or process of dissolving one substance in another.

Emulsification: The process whereby one liquid is dispersed into another liquid in the form of small droplets.

Evaporation: The process whereby any substance is converted from a liquid state to become part of the surrounding atmosphere in the form of a vapor.

Photo Oxidation: Sunlight-promoted chemical reaction of oxygen in the air and oil.

Most crude oil blends will emulsify quickly when spilled, creating a stable mousse that presents a more persistent cleanup and removal challenge. Even in high winds, usually over 70% of a heavy fuel oil spill will persist as floating or beached oil for a week or longer.

On the other hand, over 90% of the diesel in a small spill in the marine environment is either evaporated or naturally dispersed into the water column in time frames of a couple of hours to a couple of days.

What Is Weathering? Learn what happens to oil when it interacts with the physical environment and what we can learn about this behavior from the 1989 Exxon Valdez oil spill.

Oil Weathering Model, ADIOS®: In its work in oil spill response, NOAA OR&R uses its oil weathering model, ADIOS, to model how different types of oil weather in the marine environment. Working from a database of more than a thousand different crude oils and refined products, ADIOS quickly estimates the expected characteristics and behavior of spilled oil.