After the Big Spill, What Happened to the Ship Exxon Valdez? 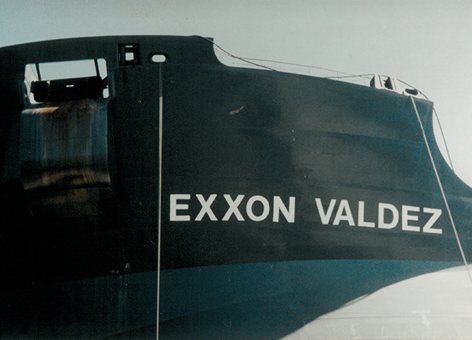 The last days of the Exxon Valdez: in the San Diego shipyard before the first name change. Photo from the collection of Gary Shigenaka, NOAA.

It is unclear whether this applies to "boats" as big as a 987-foot-long oil tanker, but it is possible that the ship originally known as the Exxon Valdez might be used to argue that the answer is "yes."

When the Exxon Valdez was delivered to Exxon on December 11, 1986, it was the largest vessel ever built on the west coast of the U.S.

On July 30, 1989, four months after it ran aground in Alaska’s Prince William Sound and caused the then-largest oil spill in U.S. waters, the crippled Exxon Valdez entered dry dock at National Steel and Shipbuilding in San Diego—its original birthplace.

The trip south from Prince William Sound had not been without incident. Divers discovered hull plates hanging from the frame 70 feet below the surface that had to be cut away, and a 10 mile oil slick trailing behind the ship for a time prevented it from entering San Diego Bay.

Nearly a year and $30 million later, the ship emerged for sea trials as the Exxon Mediterranean. The Exxon Valdez had suffered the ignominy—and corporate hardship—of effectively being singled out in U.S. legislation (the Oil Pollution Act of 1990 [PDF]) and banned from a specific U.S. body of water:

LIMITATION. Notwithstanding any other law, tank vessels that have spilled more than 1,000,000 gallons of oil into the marine environment after March 22, 1989, are prohibited from operating on the navigable waters of Prince William Sound, Alaska.

With this banishment institutionalized in U.S. law, Exxon Shipping Company shifted the operational area for the ship to the Mediterranean and the Middle East and renamed it accordingly. In 1993, Exxon spun off its shipping arm to a subsidiary, Sea River Maritime, Inc., and the Exxon Mediterranean became the Sea River Mediterranean. This was shortened to S/R Mediterranean.

In 2002, the ship was re-assigned to Asian routes and then temporarily mothballed in an undisclosed location.

A Ship Singled Out?

Exxon filed suit in federal court challenging the provisions of the Oil Pollution Act of 1990 that had banned its tanker from the Prince William Sound trade route. In November 2002, the Ninth Circuit Court of Appeals upheld the Oil Pollution Act and its vessel prohibition provision (the Justice Department noting that to that time, 18 vessels had been prevented from entering Prince William Sound). While Sea River had argued that the law unfairly singled out and punished its tanker, and that there was no reason to believe that a tanker guilty of spilling in the past would spill in the future, the three-judge panel disagreed unanimously.

In 2005, the S/R Mediterranean was reflagged under the Marshall Islands after having remained a U.S.-flagged ship for 20 years (reportedly in the hopes that it eventually would have been permitted to re-enter the Alaska – U.S. West Coast – Panama route for which it had been designed). The ship's name became simply Mediterranean.

In 2008, ExxonMobil and its infamous tanker finally parted ways when Sea River sold the Mediterranean to a Hong Kong-based shipping company, Hong Kong Bloom Shipping Co., Ltd. The ship was once again renamed, to Dong Fang Ocean, and reflagged under Panamanian registry. Its days as a tanker also came to an end, as the Dong Fang Ocean was converted into a bulk ore carrier at Guangzhou CSSC-Oceanline-GWS Marine Engineering Co., Ltd., China.

The Dong Fang Ocean labored in relative anonymity in its new incarnation until November 29, 2010. On that day, it collided with another bulk carrier, the Aali in the Yellow Sea off Chengshan, China. Both vessels were severely damaged; the Dong Fang Ocean lost both anchors, and the Aali sustained damage to its ballast tanks. The Dong Fang Ocean moved to the port of Longyan with assistance by tugs.

The End Is Near

With this last misfortune, the final countdown to oblivion began in earnest for the vessel-formerly-known-as-Exxon Valdez. In March 2011, the ship was sold for scrap to a U.S.-based company called Global Marketing Systems (GMS). GMS in turn re-sold it to the Chinese-owned Best Oasis, Ltd., for $16 million. Intending to bring the Oriental Nicety, as it had been renamed yet one last time, ashore at the infamous shipbreaking beaches of Alang, Gujarat, India, Best Oasis was blocked by a petition filed by Delhi-based ToxicsWatch Alliance with the Indian Supreme Court on the grounds that the ship could be contaminated with asbestos and PCBs. ToxicsWatch Alliance invoked the Basel Convention, which restricts the transboundary movements of hazardous wastes for disposal. However, an environmental audit required by the court showed no significant contamination, and in July 2012, the Oriental Nicety was cleared to be brought ashore for its final disposition. The ship was reportedly beached on August 2, 2012. Shanta Barley, writing for Nature, penned a wry obituary as a lead-in to her article about the last days of the ship:

The Oriental Nicety (née Exxon Valdez), born in 1986 in San Diego, California, has died after a long struggle with bad publicity.

Use Twitter to chat directly with NOAA marine biologist Gary Shigenaka about the Exxon Valdez and its impacts on Alaska's marine life and waters on Monday, March 24 at 3:00 p.m. Eastern. Follow the conversation at #ExxonValdez25 and get the details: http://response.restoration.noaa.gov/oil-and-chemical-spills/significant-incidents/exxon-valdez-oil-spill/tweetchat-25-years-exxon-valdez.html. 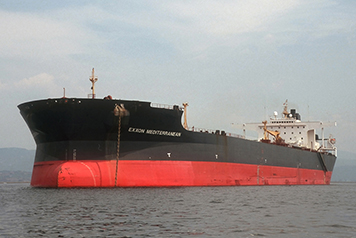 Exxon Mediterranean in Trieste, Italy, July 1991. Photo by Arki Wagner, used with permission.
Back to top