The Legacy of the Exxon Valdez Oil Spill 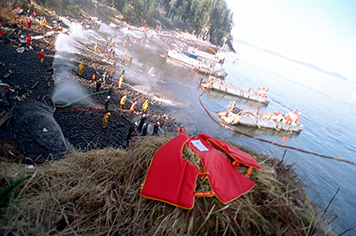 While there is no question that the Exxon Valdez spill was an unfortunate, and in some ways, tragic incident, it is also clear that it provided a necessary impetus to reexamine the state of oil spill prevention, response, and cleanup.

One result was the passage of the Oil Pollution Act of 1990 by the U.S. Congress. Many states responded in similar fashion by tightening or completely restructuring oversight of oil production and transportation.

For OR&R at the time, the Exxon Valdez spill was by far the largest incident response ever mustered, and the longest-term—scientists on-scene worked nearly round-the-clock for the six months following the spill.

In addition, it was a unique opportunity to learn about the long-term effects of oil and cleanup activities in a relatively pristine setting and to gain a greater level of understanding in order to facilitate a more effective and lower impact response in future incidents.

OR&R's long-term research on the impacts and recovery from the Exxon Valdez spill has yielded many insights into the response of a complex marine ecosystem to environmental perturbation. However, in the years since the Exxon Valdez spilled its cargo of crude oil on Bligh Reef, many parts of the Alaskan marine environment have begun to show signs of significant physical and biological change: waters have warmed, ice has receded, and populations of fish and mammals have declined.

For oil spill responders and researchers, one of the primary questions we must now ask ourselves is: How do we assess impact and recovery in a system where baseline or reference conditions are rapidly changing? Ongoing long-term OR&R experiments in Prince William Sound and Cook Inlet may help to provide some answers to this important question.