Above, Under, and Through the Ice: Demonstrating Technologies for Oil Spill Response in the Arctic 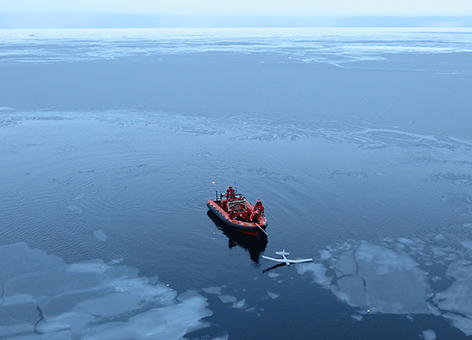 The Puma operator aboard the U.S. Coast Guard zodiak recovers the small unmanned aircraft after demonstrating its capabilities for detecting oil from the air during Arctic Shield 2013. (NOAA)

This is the third in a series of stories about the Office of Response and Restoration's Zach Winters-Staszak during Arctic Shield 2013. Read the previous posts, "Arctic-bound" and "Breaking Ice."

OCTOBER 25, 2013 -- 76° N, 158° W marks the spot. The wind chill has dropped the mercury below zero as the U.S. Coast Guard Cutter Healy, an icebreaker, sits idly, anchored by the sea ice that dominates the landscape.

All eyes are fixed on the brilliant orange of the Coast Guard zodiac, the small boat's color contrasted against the cobalt blue water off the icebreaker's port side. A faint hum of a motor gets louder and louder overhead as the "Puma" comes into view. Then, just as the miniature, remote-controlled aircraft is positioned exactly over a nearby patch of open water, the operator kills the motor and the Puma splashes down safely.

During the exercise Arctic Shield 2013, the U.S. Coast Guard Research and Development Center (RDC) brought a group of scientists and specialists together to demonstrate technologies that potentially could be used for oil spill response in the Arctic Ocean's severe conditions. 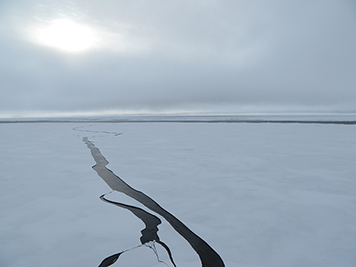 The Arctic Ocean remains a difficult to access and often dangerous environment. (NOAA)

Increased marine transportation and oil exploration in the Arctic increases the likelihood of, along with the responsibility to be prepared for, potential oil spills. Operating in an area as remote and ice-filled as the Arctic poses new logistical and tactical challenges for safe ship transit, search and rescue efforts, resource extraction, and oil spill response. For those working in oil spill response, this means developing new methods and technologies for surveying, assessing, and responding in these settings.

The RDC, coordinating efforts by the Unmanned Aircraft Systems (UAS) programs at the National Oceanic and Atmospheric Administration (NOAA) and the University of Alaska Fairbanks, demonstrated the Puma as one method to survey, identify, and monitor oil on and around the ice floes from above. The Puma is a battery-powered, aerial survey technology with military roots that is now being used for a variety of environmental applications.

The Puma's advantages for oil spill response in the Arctic are many. With its capacity for high resolution and infrared imagery, the Puma could help identify and monitor oiled environments and wildlife during response efforts, while simultaneously creating a visual record of environmental injury that could be used during a Natural Resource Damage Assessment.

The NOAA Office of Response and Restoration's Emergency Response Division has a long history of recording aerial imagery of oil spills by using trained observers aboard helicopters or airplanes to find and photograph oil on the water's surface. Using a UAS like the Puma removes the risk to human safety, requires batteries and not fuel, and has been shown to have little-to-no influence on the behavior of wildlife. In fact, NOAA has already used Pumas to great effect during marine mammal and sea bird surveys.

This last point is especially important when you consider an animal like the Pacific walrus. With recent, dramatic summer losses in sea ice, Pacific walruses have been seen congregating en masse on the shoreline of Alaska, a behavior happening earlier and earlier in the year. Disturbance of these large groups of walruses, which could be caused by noisy surveying techniques, creates panic in the animals, causing a stampede that could end up trampling and killing young walruses.

While the Pumas were busy scanning the ice and sea from the sky, scientists from Woods Hole Oceanographic Institute were fast at work deploying their "Jaguar" beneath the water. The Jaguar is an Autonomous Underwater Vehicle (AUV) designed to map the Arctic sea floor, but during Arctic Shield 2013, the science team instead used it to map the curves and channels on the underside of the sea ice.

The Arctic Shield team prepares the Jaguar, an Autonomous Underwater Vehicle, for its underwater mission in the Arctic Ocean. It gathered data on the inverted topography of the underside of sea ice, as well as a range of oceanic conditions. (U.S. Coast Guard)

For example, if an oil spill occurred near an ice floe, responders would need to know where oil could pool up or be funneled in the curves or channels beneath the sea ice. The Jaguar uses acoustic technology to map the differences in sea ice thickness or "draft" as it travels along its programmed path under the ice. A suite of oceanographic sensors are also installed that measure water temperature, conductivity, pressure, and salinity along the way. In addition, scientists can install an optical back-scatter sensor that can detect oil in the water column.

To top things off, the Jaguar's footprint is relatively low. The entire system is easily shipped, only requires a three-person team to operate, and doesn't need a large vessel like the Healy to be deployed. Having a highly functional, low-impact tool is a major advantage out on the Arctic Ocean.

A Mapping Tool Made for the Arctic

It was with remote environments like the Arctic in mind that the Office of Response and Restoration developed Stand-alone ERMA, an internet-independent version of our Arctic ERMA online mapping tool used in response efforts for oil spills, hazardous waste spills, and ship groundings. For OR&R's Zach Winters-Staszak, his role in Arctic Shield was to integrate and display the data collected by the technologies just described into Stand-alone ERMA. ERMA integrates multiple data sources and displays them in a single interactive map. With the resulting data-rich map, he could demonstrate the advantage of establishing a common operational picture during an oil spill response scenario—all without an internet connection. 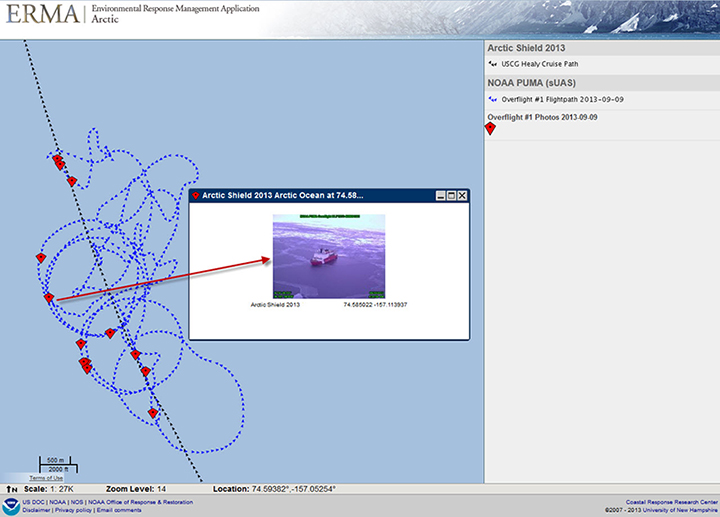 A view from Arctic ERMA, NOAA's online mapping tool for environmental disasters. You can see the path of the icebreaker Healy, the Puma's flight, and the photos and their location taken by the Puma. (NOAA)

During Arctic Shield 2013, Stand-alone ERMA was integrated into the ship's local network, and as new data were recorded and displayed, everyone on the ship, from the bridge to the science decks, could view the same results on their computer screens.

In a typical oil spill response, there can be decision makers from federal, state, and local governments; private industry; and a multitude of scientists and technicians all working together. Everyone needs access to the same information, especially when it is constantly changing, in order to make the most informed decisions. But if internet availability is sporadic or nonexistent (not unusual in the Alaskan Arctic), most common operational pictures are rendered inoperable. Stand-alone ERMA bridges that gap, while providing the same experience and tools found with the online version. Demonstrating the utility of Stand-alone ERMA aboard the Healy made the advantages of a flexible common operational picture very clear.

Mind the Gaps (and Bridge Them)

The Coast Guard Research and Development Center, which organized the demonstration, has taken a critical look at the difficulties and challenges associated with operating in an icy ocean environment. As a result they have identified a wide variety of technologies—some of which were demonstrated on this trip—that could potentially improve response during an actual oil spill. Still, a great deal of work remains as NOAA and our partners work to better understand Arctic ecosystems and overcome the challenges of stewardship in a new and uncertain period in history. 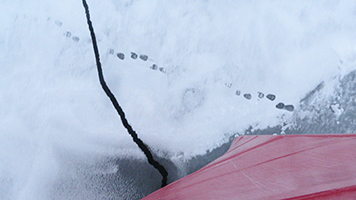 The only trace of a polar bear were these tracks in the snow and ice as the Healy plowed past. (NOAA)

Looking over the bow of the Healy as the ship fractured the ice beneath, Winters-Staszak caught a brief glimpse of polar bear tracks in the snow. The animal itself was nowhere to be seen, but as he watched the tracks fade into the distance, he was reminded of why he was there:

"When you're out on the ice, breathing in the frigid air, knowing that polar bears are out there hunting and raising cubs, you realize what is right in front of you is the only place like it in the world. Being a part of Arctic Shield 2013 was an incredibly rewarding and humbling experience, one that is helping me figure out what data we still need and develop the tools to strengthen our ability to respond to an oil spill."