Back to the Shore after Hurricane Sandy

MAY 10, 2013 -- With Memorial Day approaching and summer weather returning, folks in the northeast will once again be flocking to the shore, as they have for generations. This summer season is the first since Hurricane Sandy hit the region in late October of 2012, with devastating effects to beaches from Connecticut to Virginia. Much of the damage has been repaired and many visitors likely will find their favorite beaches as enjoyable as ever, but there is much work remaining to do.

The NOAA Office of Response and Restoration (OR&R) responded immediately in the wake of the massive storm. OR&R’s Emergency Response Division provided scientific support to the U.S. Coast Guard to contain a major diesel spill at the Motiva Refinery in Sewarren, N.J., next to New York's Staten Island and Raritan Bay. We also provided support for the many smaller petroleum product spills in northern New Jersey and southern New York. Aerial and ground surveys helped identify and prioritize the cleanup of pollution sources from boats, displaced hazardous material containers, and other debris. OR&R was on scene working with other state and federal agencies to lead a preliminary assessment of natural resource impacts from the oil spills for possible Natural Resource Damage Assessment claims and restoration. In addition, the Coast Guard and other responders used OR&R's collaborative online mapping tool, Environmental Response Management Application (ERMA®) for the Atlantic Coast, as the "common operational picture," that is, the official "big picture" tool for coordinating pollution response activities. Atlantic ERMA, which is customized for New York and New Jersey waters, was involved in mapping the Hurricane Sandy response and recovery efforts since before the storm hit land. In the days leading up to landfall, OR&R started populating Atlantic ERMA with storm-specific data, such as predicted storm surge models, hurricane track and wind speeds, and NOAA facility locations. 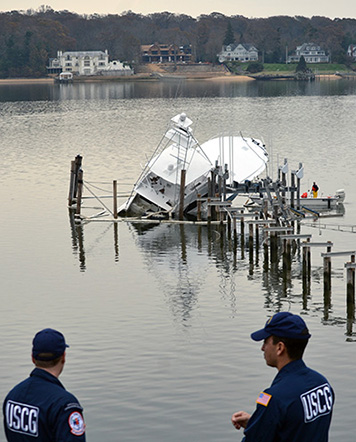 A partially submerged vessel in Navesink River, N.J., Nov. 10, 2012. Boom was placed around the vessel to mitigate pollution during the response efforts. (U.S. Coast Guard)

In the aftermath of Hurricane Sandy, Atlantic ERMA served as the common operational picture for the Hurricane Sandy pollution response. It aided the NOAA Scientific Support Coordinators (our pollution first responders), U.S. Coast Guard, and U.S. Environmental Protection Agency in the removal and cleanup of identified pollution sources and threats. Atlantic ERMA integrated these response efforts with environmental data (like locations of sensitive habitat) to give responders a better idea of how to deal with pollution threats while minimizing environmental damages. As the common operational picture, ERMA provided a single platform for responders to view all of the storm-related data and imagery as well as various cleanup efforts by the states and other federal agencies. Our team of Geographic Information Systems (GIS) specialists working on ERMA also helped provide data management support in tracking the progress made by the pollution response field teams.

Making it Safe to Get Back in the Water

In the Hurricane Sandy Relief Bill, Congress provided the NOAA Marine Debris Program with funds to address marine debris issues resulting from Sandy. In addition, funds were allocated to OR&R's Emergency Response Division to update our Environmental Sensitivity Index maps on the east coast, with particular emphasis on areas affected by Hurricane Sandy and other coastal storms over the past several years. These maps identify coastal shorelines, wildlife, and habitat that may be especially vulnerable to an oil spill and also include the resources people use, such as a fishery or recreational beach. 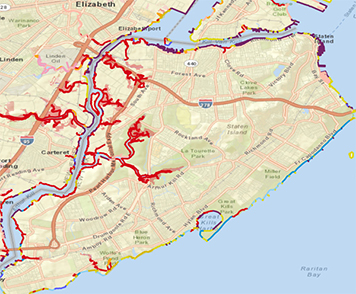 Click on this map to view the complete Environmental Sensitivity Index map, created by OR&R's Emergency Response Division. The map shows sensitive habitats and species that are typically present in the Staten Island area in November and December, the months following Hurricane Sandy. (NOAA)

Marine debris can be found in concentrations across the impacted region both on the shoreline and below the water surface. These items pose potential hazards to navigation, commercial fishing grounds, and sensitive ecosystems. We are using Atlantic ERMA to provide mapping support and tools to show aerial imagery, debris dispersion models, and identified marine debris locations supplied by stakeholders. Our mapping support also helps with the planning efforts for debris cleanup. A combination of aerial, underwater, and shoreline surveys are necessary to assess the quantity and location of marine debris in the impacted coastal areas. These assessments will allow NOAA to estimate the debris impacts to economies and ecosystems, identify priority items for removal, support limited removal efforts, and help bring our northeastern shores back to a sunnier state. Read about more examples of our work protecting and restoring the shores the nation loves to visit. 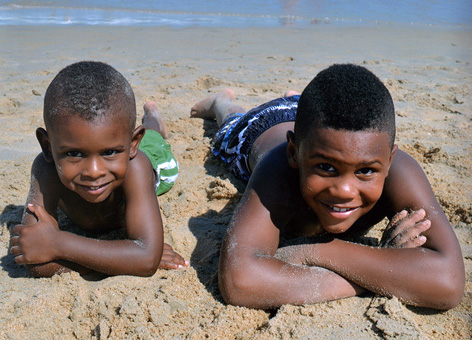 Two boys take a break on the beach in Ocean City, Md., during the summer of 2012, before Hurricane Sandy. (Glenda Powell/all rights reserved) 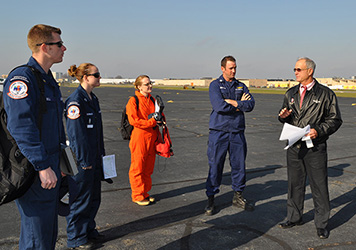 A response team formed by the Hurricane Sandy Pollution Response Unified Command prior to an overflight during which the U.S. Coast Guard worked with NOAA to map areas of possible pollution threats in New York and New Jersey. LTJG Alice Drury of OR&R is in the middle of the group. (U.S. Coast Guard)
Back to top