Emergency Restoration Is in a Basketful of Coral

DECEMBER 3, 2013 -- In 30 feet of water, just outside the entrance to Hawaii's Kalaeloa Harbor, emergency coral restoration is just getting underway. NOAA and our partners are working with the owners of the cargo vessel M/V VogeTrader to repair corals that were injured when the vessel accidentally lodged itself onto the reef one morning in 2010. The grounding—and the response activities taken to haul the vessel off the reef and prevent it from spilling any of its fuel—crushed, broke, dislodged, and buried various species of corals. A few of the types of marine life affected include the common coral species Montipora capitata (rice coral), Porites lobata (lobe coral), Pocillopora meandrina (cauliflower coral); sponges; and other bottom-dwelling invertebrates. We're pursuing emergency restoration to prevent unnecessary future injuries that might occur if actions are further delayed. Beginning on October 30, 2013, teams of divers began working to reattach broken coral and remove rubble to prevent loose pieces from moving with wave action and causing further damage to the reef. This restoration project requires a series of trips, over several months, to the grounding location near the coast of Oahu. NOAA and our partners undertook the first of many of these missions during a recent two-day effort. Leaving from Kalaeloa/Barber's Point Harbor, the first day was spent conducting acoustic mapping surveys to determine exactly where the rubble was located and the size of the affected area. On the second day divers were back to find and move any live corals and coral fragments out of the area where rubble is going to be removed. We recovered the corals by hand, placing them in baskets before transporting them a short distance to areas outside the work zone. The corals will be safe there until after the rubble is removed and they can be transported back into the cleared area for reattachment.

Stay tuned as we post updates and photos of the progress. In the meantime, you can learn more about the underwater techniques and technologies we use for these types of projects. UPDATE: Learn how undersea vacuums, power washers, and a strong winter storm would help this restoration work and watch a video of divers restoring the damaged coral. 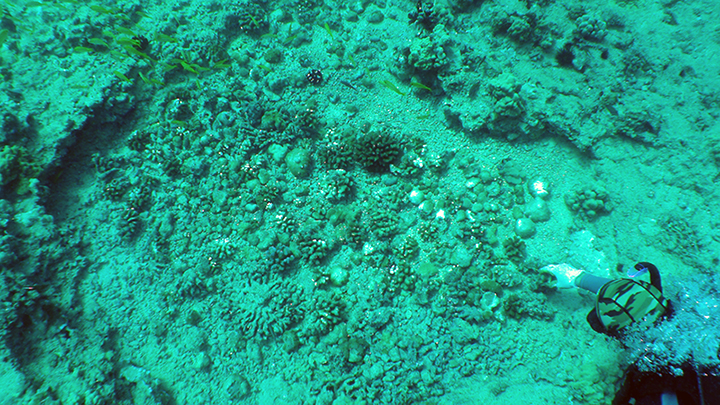 Loose corals are relocated in a safe area outside the rubble removal site, where the ship and response activities impacted the reef. (NOAA) 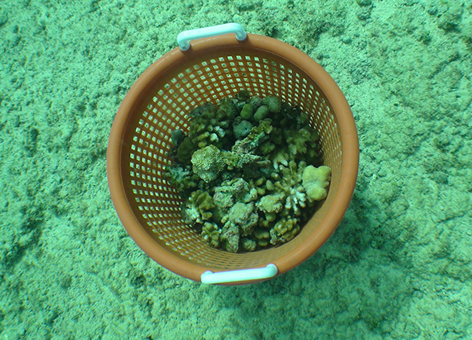 Basket of loose corals collected from the area damaged by the VogeTrader's grounding, where divers are removing rubble. (NOAA) 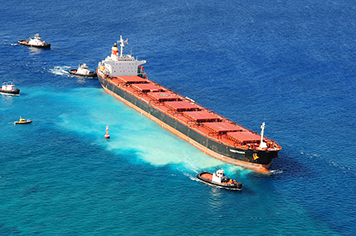 The 734-foot bulk carrier M/V VogeTrader after it ran aground near Oahu, on February 5, 2010. The milky color in the water beneath the ship is the pulverized coral. (U.S. coast Guard)
Back to top