POSTED SEPTEMBER 4, 2015 | UPDATED SEPTEMBER 17, 2015 -- On the evening of September 2, 2015, two tug boats collided on the Mississippi River near Columbus, Kentucky, spilling slurry oil into the river. Early reports, which later may be corrected, indicate an estimated 120,500 gallons of oil were released from a hole in the cargo tank of a barge being towed by the tug Dewey R during the collision. The spill and ensuing response closed the river between mile markers 938 and 922, south of Paducah, Kentucky, but the waterway was reopened to vessel traffic as of September 8. At the request of the U.S. Coast Guard, NOAA's Office of Response and Restoration is supporting the response and sending oil spill and data management experts to the scene of the spill. NOAA scientific support coordinators are providing a variety of information for the response, including river flow forecasts, chemistry of the spilled oil, a submerged oil assessment (because this heavier oil may sink), and other information to help determine where the spill will go and what can be done to protect our waterways and keep commerce moving. 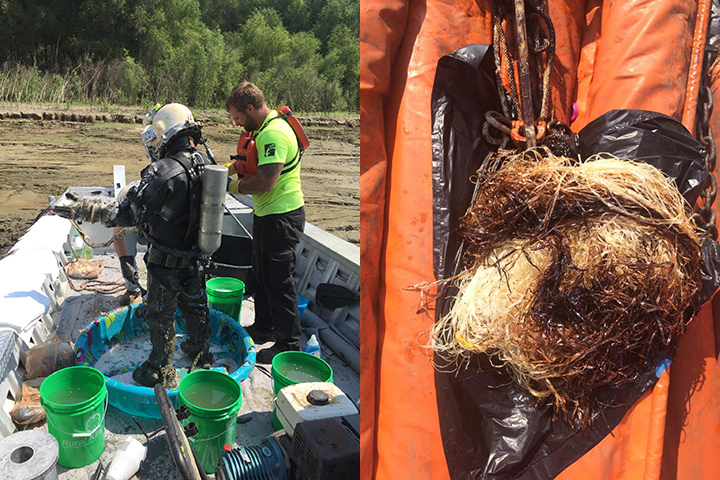 Left, a professional diver gets cleaned up following dive operations in the Mississippi River on September 6, 2015, which help assess the state of the damaged vessel and any potential oil on the river bottom. (U.S. Coast Guard) Right, using a technique known as "snare sampling," responders use "pom poms" placed at various sampling points underneath the river surface to test for the presence of submerged oil. Here, an area tested positive for submerged oil on September 5, 2015, following a collision and oil spill on the Mississippi River near Columbus, Kentucky. (NOAA)

The natural resource agencies also are beginning to assess potential impacts to natural resources. Updates from NOAA about this oil spill may be available on the Office of Response and Restoration website and on IncidentNews.

Following a collision and oil spill near Columbus, Kentucky, scientists with the response transfer sediment (left) and water (right) samples to collection jars for analysis. (NOAA)

What Is Slurry Oil? 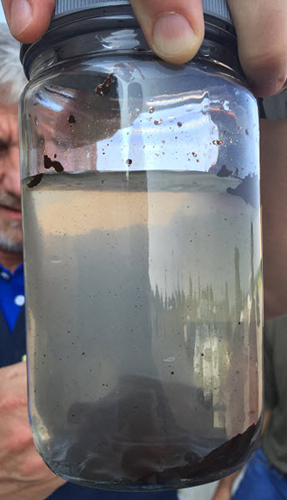 A September 5 sample of the slurry oil discharged into the Mississippi River from Barge Apex 3508 after a collision on September 2, 2015. (NOAA)

Slurry oil is a residual oil resulting from the refining process and when spilled, most of it will sink or become suspended in the water column. A U.S. Coast Guard overflight the morning of September 3 revealed a floating sheen of oil four to five miles downstream of the discharge, which is not unexpected with this type of heavy oil. Learn more about different types of oil and their behaviors when spilled and read about a 2005 slurry oil spill in the Gulf of Mexico.

How Is an Oil Spill in a River Different Than One in the Ocean?

From dams and density to muddy waters and vegetation, rivers offer a very different environment than the ocean during an oil spill. Read more about the kinds of unique challenges we have to consider during an oil spill in a river.

Find basic information related to oil spills, cleanup, impacts, and restoration, as well as NOAA's role during and after oil spills. 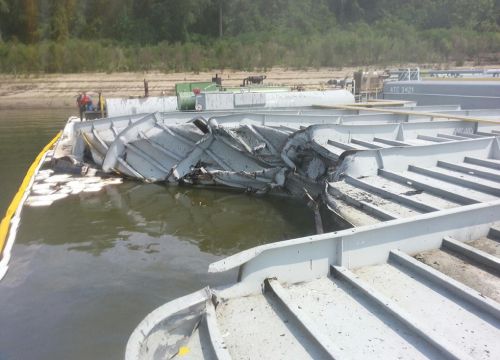 A view of the damaged barge Apex 3508, whose tug boat collided with another on September 2, 2015, causing an oil spill on the Mississippi River near Columbus, Kentucky. The rest of the oil on board the barge has since been removed. (U.S. Coast Guard)
Back to top