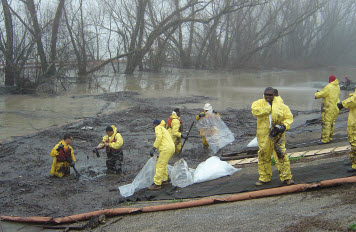 Responders work at the river's edge following the M/V Westchester spill in the Mississippi River near Empire, Louisiana, in November 2000. (NOAA)

Here are five reasons why oil spills in rivers differ from spills that occur in the open ocean: 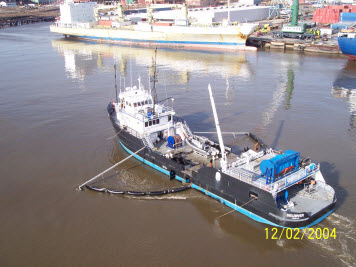 Skimming the Delaware River in Philadelphia following the M/T Athos I spill on November 26, 2004. (NOAA)

More Information about Spills in Rivers

Physical Processes Affecting the Movement and Spreading of Oils in Inland Waters [PDF, 547 KB]: This 1995 technical report, written for oil spill responders and planners, examines the physical factors that determine how a spilled pollutant will move in rivers and lakes.

How Is an Oil Spill in a River Different Than One in the Ocean?: Learn more about the factors that influence how an oil spill behaves in a river versus the open ocean, along with several examples and photos.

Oil in the Ocean: Watch what happened on the Mississippi River in 2008, when a 600-foot tanker collided with Barge DM932, a 200-foot fuel barge, tearing the barge in half.

Athos I Spill: Here are photos and other information about the tanker Athos I, which was damaged in November 2004 while it was docking at the CITGO refinery on the Delaware River and began spilling its cargo of Venezuelan crude oil.

M/V Westchester Spill: Here are photos and other information about the M/V Westchester, which lost steerage on the Mississippi River in November 2000, struck an obstruction, and began leaking oil near Empire, La.