MARCH 16, 2015 -- Providing access to data is a challenging task during natural disasters and oil spill responses—which are hectic enough situations on their own. Following one of these incidents, a vast amount of data is collected and can accumulate quickly. Without proper data management standards in place, it can take a lot of time and effort to ensure that data are correct, complete, and in a useful form that has some kind of meaning to people. Furthermore, as technology advances, responders, decision makers, and the public expect quick and easy access to data. NOAA's Environmental Response Management Application (ERMA®) is a web-based mapping application that pulls in and displays both static and real-time data, such as ship locations, weather, and ocean currents. Following incidents including the 2010 Deepwater Horizon oil spill and Hurricane Sandy in 2012, this online tool has aided in the quick display of and access to data not only for responders working to protect coastal communities but also the public. From oil spill response to restoration activities, ERMA plays an integral part in environmental data dissemination. ERMA reaches a diverse group of users and maintains a wide range of data through a number of partnerships across federal agencies, states, universities, and nations. Because it is accessible through a web browser, ERMA can quickly communicate data between people across the country working on the same incident. At the same time, ERMA maintains a public-facing side which allows anyone to access publically available data for that incident. 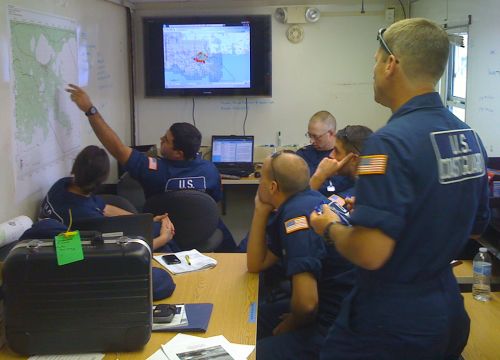 Members of the U.S. Coast Guard using ERMA during the response to Hurricane Isaac in 2012. (NOAA)

ERMA in the Spotlight

During the Deepwater Horizon oil spill in the Gulf of Mexico, ERMA was designated as the “common operational picture” for the federal spill response. That meant ERMA displayed response-related activities and provided a consistent visualization for everyone involved—which added up to thousands of people. To date, the ERMA site dedicated solely to the Deepwater Horizon spill contains over 1,500 data layers that are available to the public. Data in ERMA are displayed in layers, each of which is a single set of data. An example of a data layer is the cumulative oil footprint of the spill. This single data layer shows, added together, the various parts of the ocean surface the oil spill affected at different times over the entire course of the spill, as measured by satellite data. Another example is the aerial dispersant application data sets that are grouped by day into a single data layer and show the locations of chemical dispersant that were applied to oil slicks in 2010. Even today, ERMA remains an active resource during the Natural Resource Damage Assessment process, which evaluates environmental harm from the oil spill and response, and NOAA releases data related to these efforts to the public as they become available. ERMA continues to be one of the primary ways that NOAA shares data for this spill with the public. 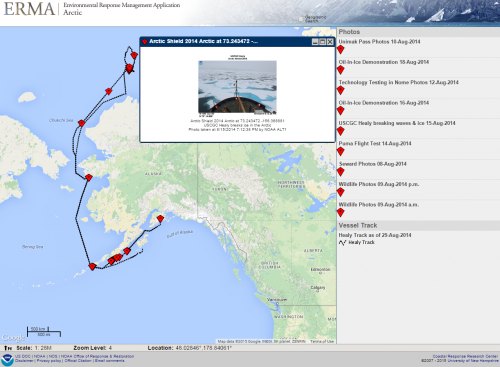 While the Deepwater Horizon oil spill may be one ERMA’s biggest success stories, NOAA has created 10 other ERMA sites customized for various U.S. regions. They continue to provide data related to environmental response, cleanup, and restoration activities across the nation’s coasts and Great Lakes. These 10 regional ERMA sites together contain over 5,000 publicly available data layers, ranging from data on contaminants and environmentally sensitive resources to real-time weather conditions. For example, in 2012, NOAA used Atlantic ERMA to assist the U.S. Coast Guard, Environmental Protection Agency, and state agencies in responding to pollution in the wake of Hurricane Sandy. Weather data were displayed in near real time as the storm approached the East Coast, and response activities were tracked in ERMA. The ERMA interface was able to provide publically available data, including satellite and aerial imagery, storm inundation patterns, and documented storm-related damages. You can also take a look at a gallery of before-and-after photos from the Sandy response, as viewed through Atlantic ERMA. In addition, the ERMA team partnered with NOAA’s Marine Debris Program to track Sandy-related debris, in coordination with state and local partners. All of those data are available in Atlantic ERMA. Looking to the north, ERMA continues to be an active tool in Arctic oil spill response planning. For the past two years, members of the ERMA team have provided mapping support using Arctic ERMA during the U.S. Coast Guard’s Arctic Technology Evaluation exercises, which took place at the edge of the sea ice north of Barrow, Alaska. During these exercises, the crew and researchers aboard a Coast Guard icebreaker tested potential technologies for use in Arctic oil spill response, such as unmanned aircraft systems. You can find the distributions of sensitive Alaskan bird populations, sea ice conditions, shipping routes, and pictures related to these Arctic exercises, as well as many more data sets, in Arctic ERMA.