The flammable area is the part of a flammable vapor cloud where the concentration is in the flammable range, between the Lower and Upper Explosive Limits (LEL and UEL). (These are also known as the Lower and Upper Flammability Limits.) These limits are percentages that represent the concentration of the fuel (that is, the chemical vapor) in the air. If the chemical vapor comes into contact with an ignition source (such as a spark), it will burn only if its fuel-air concentration is between the LEL and the UEL—because that portion of the cloud is already pre-mixed to the right mixture of fuel and air for burning to occur.

If the fuel-air concentration is below the LEL, there is not enough fuel in the air to sustain a fire or an explosion—it is too lean. If the fuel-air concentration is above the UEL, there is not enough oxygen to sustain a fire or an explosion because there is too much fuel—it is too rich. (This is similar to an engine that cannot start because it has been flooded with gasoline.)

You might expect that the LEL itself would be used as the LOC to determine the areas in which a fire might occur, because the LEL is the concentration above which a gas can combust (that is, catch on fire or explode, depending on the conditions). However, the concentration levels estimated by ALOHA are time-averaged concentrations, and whether or not the cloud can catch on fire at specific locations within a real flammable vapor cloud is actually determined by the instantaneous concentration at a given time.

If you model a flammable area in ALOHA using the default LOCs, your threat zone estimate will look similar to the one pictured below. The red and yellow threat zones both indicate areas where the fuel-air concentration is predicted to exceed that LOC at some time after a release begins; however, the red area is the more dangerous area, where flame pockets could occur. 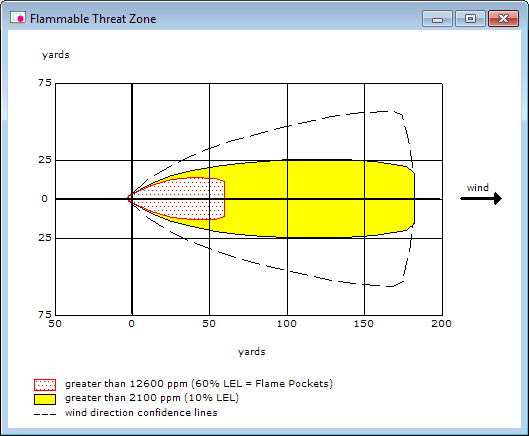 Using Other Flammable Levels of Concern in ALOHA

If you prefer, you can enter up to three flammability LOCs of your own (rather than use the default values). On the Flammable Level of Concern dialog box, simply choose "User specified" from the drop-down list of LOC values and type in your own LOCs.