When you are modeling a chemical release in ALOHA and you want to assess the toxicity threat, you must choose one or more toxic Levels of Concern (LOCs). A toxic LOC tells you what level (threshold concentration) of exposure to a chemical could hurt people if they breathe it in for a defined length of time (exposure duration). Generally, the lower the toxic LOC value for a substance, the more toxic the substance is by inhalation*. Toxic LOCs also may be referred to as exposure limits, exposure guidelines, or toxic endpoints.

ALOHA is used primarily for emergency response or planning situations, where the goal is to assess the threat posed to the general public by a chemical release. For toxic releases, ALOHA uses public exposure guidelines preferentially for the default toxic LOCs, because these guidelines are specifically designed to predict how the general public will respond to a short-term, one-time release. The most common public exposure guidelines (AEGLs, ERPGs, and TEELs) all have three tiers of exposure values for each covered chemical. There are some key differences between the different types of exposure guidelines; however, at a very general level, the tiers are similar: the first tier (e.g., AEGL-1) is a mild effects threshold, the second tier (e.g., AEGL-2) is an escape-impairment threshold, and the third tier (e.g., AEGL-3) is a life-threatening effects threshold. ALOHA determines its default toxic LOCs based on the following hierarchy:

If you model a toxic vapor cloud scenario in ALOHA using the default public exposure guidelines as your toxic LOCs, your threat zone estimate will look similar to the one pictured below. The red, orange, and yellow threat zones indicate the areas where the ground-level pollutant concentration is predicted to exceed the corresponding LOC at some time after the release begins. Typically, the "-3" public exposure guideline values are used for the most hazardous (red) threat zones, because they represent the threshold concentration above which health effects may be life threatening. 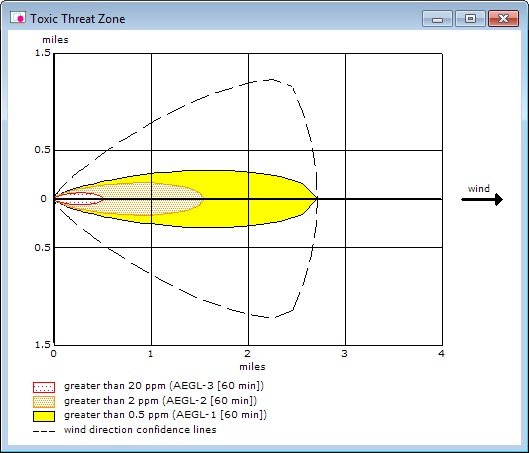 Note: In most cases, the LOCs available on the Toxic Level of Concern dialog will be concentration threshold values based on toxicity. However, for some flammable chemicals, the LOCs may have been based on the Lower Explosive Limit (or some percentage of it). If you have questions about whether a particular LOC value is based on toxicity or flammability, you should refer to the documentation provided by the LOC developers. (For developer websites, see the AEGL, ERPG, PAC, and IDLH pages.)

Using Other Toxic Levels of Concern in ALOHA

If you prefer, you can temporarily override ALOHA's default toxic LOC choices by using the drop-down lists on the Toxic Level of Concern dialog. You can choose LOCs that are lower in ALOHA's hierarchy—or you can choose "User specified" and then type in values of your own. (Note that the red threat zone LOC should be the highest value and the yellow threat zone LOC should be the lowest value.) 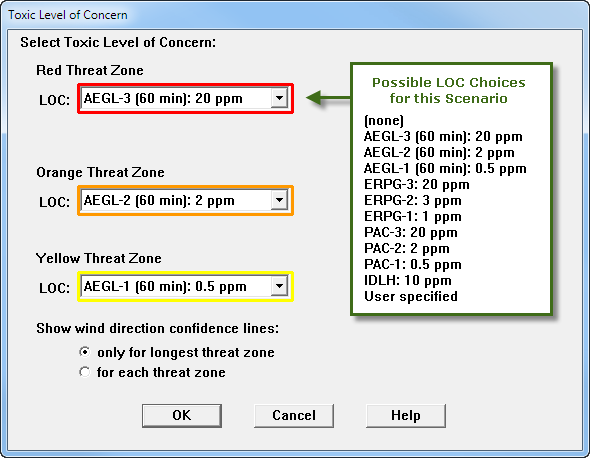 If you want to permanently override ALOHA's default toxic LOC choices, you can add default toxic LOC values to any pure chemical record in ALOHA's chemical library. For more information on setting your own LOCs, read the Ask Dr. ALOHA article on choosing toxic LOCs.