Toxic Levels of Concern (LOCs) are required input—just like wind speed or air temperature—for toxic gas dispersion scenarios in ALOHA. The program provides you with default threshold values for your LOCs, which will be the best option for many of your releases. However, there are times when you should use other LOCs. As with any values you enter, you should always make sure that the LOCs are appropriate for your scenario.

This article discusses the following topics:

What is a toxic Level of Concern?

A toxic LOC tells you what level (threshold concentration) of exposure to an airborne chemical could hurt people if they breathe it in for a defined length of time (exposure duration). For each scenario, you may choose up to three LOCs in ALOHA to assess different levels of potential exposure.

For each LOC, ALOHA estimates a threat zone where the ground-level pollutant concentration is predicted to exceed that LOC at some time after a release begins. If three LOCs are chosen, ALOHA will display the threat zones in red, orange, and yellow, overlaid on a single picture (as shown in Figure 1 below). By default, the red zone is the worst hazard, typically based on a threshold concentration above which health effects may be life threatening. 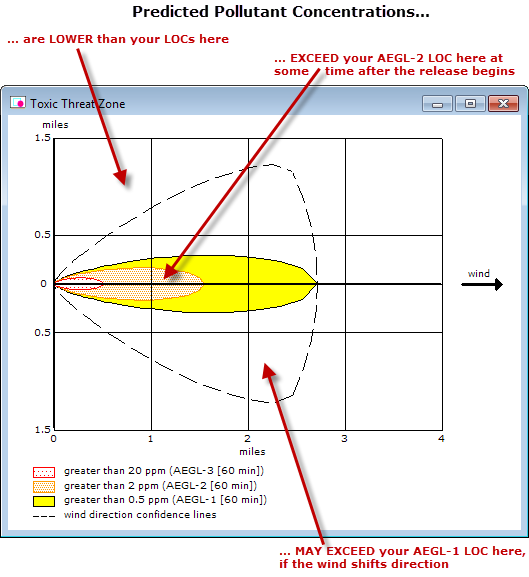 Figure 1. An ALOHA toxic threat zone picture, showing where pollutant concentration estimates are higher or lower than the chosen LOCs. The red threat zone is the most hazardous.

ALOHA is used primarily for emergency response or planning situations, where the goal is to assess the threat posed to the general public by a chemical release. For toxic releases, ALOHA uses public exposure guidelines preferentially for the default toxic LOCs, because these guidelines are specifically designed to predict how the general public will respond to a short-term, one-time release.

The most common public exposure guidelines (AEGLs, ERPGs, and TEELs) all have three tiers of exposure values for each covered chemical. There are some key differences between the different types of exposure guidelines; however, at a very general level, the tiers are similar: the first tier (e.g., AEGL-1) is a mild effects threshold, the second tier (e.g., AEGL-2) is an escape-impairment threshold, and the third tier (e.g., AEGL-3) is a life-threatening effects threshold. On a threat zone picture, these tiers correspond to the yellow, orange, and red threat zones.

Most common chemicals will be defined under one or more of these public exposure guidelines; however, you may occasionally be faced with a chemical for which no public guideline exists. No clear rules describe what you should do if you're in this situation, and your goal is to assess the hazard to the general public posed by a release of that chemical. One option is to use a workplace exposure limit (such as an IDLH) as your toxic LOC. These workplace exposure limits are usually defined for healthy adult workers, and typically incorporate safety factors to ensure that workers won't be overexposed to hazardous chemicals in the workplace. However, if you're considering this option, be aware that:

How do I choose toxic Levels of Concern in ALOHA?

Once you choose a chemical, ALOHA will display the chemical's LOCs in the Text Summary window with other chemical data information, as shown in Figure 2. Although a chemical may be defined under multiple hazard classification systems, ALOHA will only display the values for the public exposure guideline it uses as the default.

Figure 2. ALOHA's Text Summary window; the LOCs for ammonia are highlighted in yellow.

Note: In the Text Summary window, you also may see other LOC values such as IDLH, LEL (Lower Explosive Limit), and UEL (Upper Explosive Limit). If the chemical is flammable, ALOHA can use the explosive limits (also called the flammability limits) to estimate the flammable area of the vapor cloud.

Once you've entered the details about the source of the chemical release and you're ready to display a threat zone estimate, you will need to select your LOCs on the Toxic Level of Concern dialog box (Figure 3). To make things easier for you, ALOHA automatically provides default LOCs based on this hierarchy:

Most people will use ALOHA's default LOCs; however, ALOHA also provides some additional LOC options. For each LOC, you can choose a different LOC from the pulldown list of available LOCs (such as AEGLs, ERPGs, PACs, and IDLH) or you can choose User Specified from the list and enter your own LOC value. 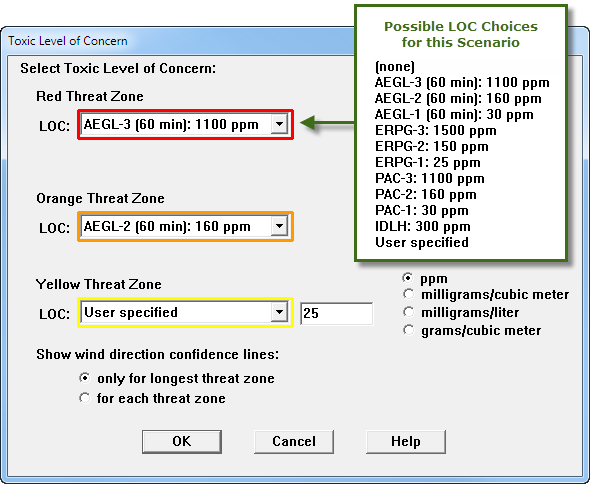 Figure 3. Choose your toxic LOCs for ammonia from the pulldown list of common exposure values or specify your own. Here, a user-specified value is being entered by hand for the LOC-1 level.

Setting a user-specified LOC, as in Figure 3, is temporary. However, you can permanently add your own default toxic LOCs for any chemical in ALOHA's chemical library, as shown in Figure 4. To do this: 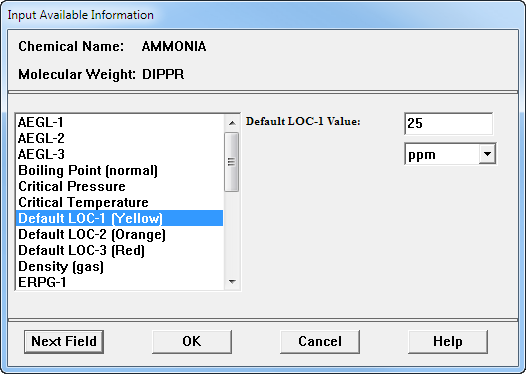 Once you have added your own LOCs for a particular chemical, ALOHA will use those values rather than its standard defaults as the LOCs for that chemical. Your new default LOCs will be displayed in the Text Summary window above the standard LOCs.

When should I use other Levels of Concern?

Although ALOHA makes it easy for you by providing default LOCs and common alternates, there may be times when another LOC is more appropriate for your purpose. As you choose LOCs for use in ALOHA, ask yourself whether it makes sense in the context of your work. To predict the area of a hazard or other effect, you must first decide what the hazard or effect is, and then make sure that the LOC reflects it. For example:

What about exposure durations?

If you are using ALOHA to model an accidental chemical release, you should choose LOCs that have exposure durations appropriate for emergency response use. After this type of release, people downwind may be exposed to high concentrations of the chemical, but typically for only a brief period. An LOC with an exposure duration much greater than an hour is probably not appropriate for use in ALOHA, because ALOHA only models the release for one hour from your start time.

You can learn more about exposure durations associated with exposure limits by reading the Ask Dr. ALOHA article on working with the concentration graph.

For ALOHA's results to be useful to you, you must use accurate values for model inputs such as wind speed or tank size. You also must choose LOCs that are appropriate for the scenario you're modeling. As much as possible, your LOCs should:

Go back to the Ask Dr. ALOHA overview.