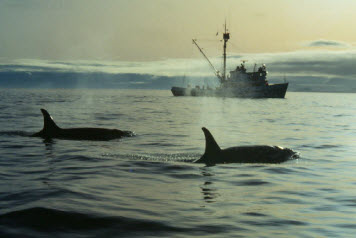 Evidence suggests that killer whales are unlikely to detect and avoid spilled oil. In the coastal waters of the Pacific Northwest, the southern resident killer whale population is listed as endangered under the U.S. Endangered Species Act and is also protected under the Marine Mammal Protection Act.

When oil spills occur, "hazing" methods are sometimes used to deter whales from the area of the spill. Among the hazing methods considered are the following:

Specific hazing methods, if any, recommended at the time of a spill will be those that have the greatest chance of success, depending on current conditions and information. Whether or not killer whales can be deterred from entering an oil spill is directly related to the degree to which the whales are attracted to an area.

No one individual hazing technique will work in all situations. Unfortunately, hazing and monitoring activities are the only mitigation measures possible during an oil spill, as capture and rehabilitation of killer whales is improbable.

How Do You Keep Killer Whales Away From an Oil Spill? NOAA has identified tools and techniques to deter endangered killer whales from swimming through oil spills.

How to keep killer whales out of oil spills: A SeaDoc Society article about its partnership with NOAA to help protect the Salish Sea's resident and transient killer whales from spilled oil.