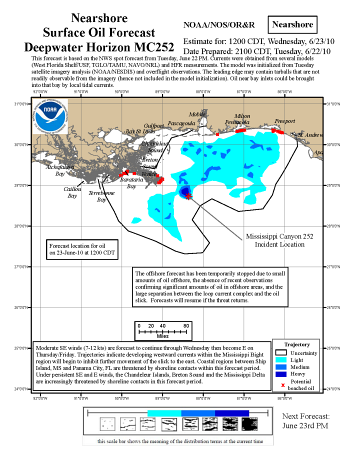 The trajectory maps were produced using GNOME, the spill trajectory model developed by OR&R's Emergency Response Division. The production of maps was discontinued August 23, 2010, after overflights and satellite analyses eventually showed no recoverable oil in the spill area.

The trajectory maps are available for download, grouped by date and by type, through the links in the navigation bar at the top of this page. As you view the maps, you may notice that some maps are titled "Mississippi Canyon 252," which is the oil and gas prospect block where the Deepwater Horizon drilling rig was located.

This page provides information about the types of maps that were produced, as well as publications written to help map users understand the oil trajectory maps.

Different types of maps were produced during the response, based on the needs of the response team:

Cumulative Trajectory Maps: Cumulative trajectory maps were produced early in the Deepwater Horizon spill response. They showed on one map the surface location of spilled oil for several consecutive days, as well as a forecast for the following day. As the area of water affected by the spill grew larger, the forecast aspect of these maps became more important than the day-to-day changes in surface oil, so the next trajectory products included only forecasts. The cumulative maps were produced from April 26 through May 6 (except April 27), 2010.

Nearshore Surface Oil Forecasts: Nearshore forecasts for 24 hours, 48 hours, and 72 hours were produced for surface oil in the nearshore (i.e., out to the continental slope, not typically affected by the Loop Current system) to support daily response planning. These forecasts continued to be produced until no recoverable oil was seen in overflights of the area for about three weeks. These maps were produced from April 30 through August 23, 2010.

Offshore Surface Oil Forecasts: In mid-May, when a "tail" of oil entered the northern part of the Loop Current, it created a potential pathway for oil to be transported to the Florida Keys, Cuba, or the Bahamas. With this change in the scale of the trajectory forecasts, OR&R began producing forecasts for two regions: nearshore and offshore. The offshore forecasts also supported daily response planning, predicting where surface oil impacted by the Loop Current system would be in the next 24, 48, and 72 hours. Weeks later, when recoverable oil was no longer observed in overflights or satellite analyses in this region, the offshore forecasts were phased out. These maps were produced from May 18 through June 17, 2010.

The following publications were created to help map users understand and interpret the oil trajectory maps.

Questions: Contact us with questions about our spill trajectory maps.