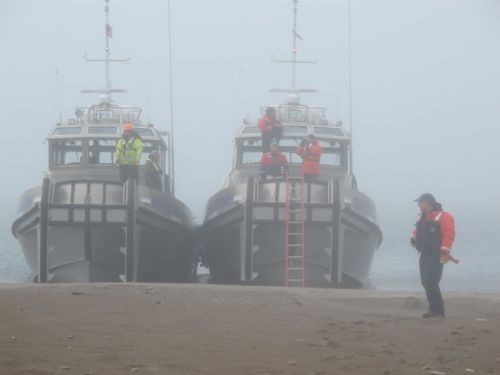 Aug. 15, 2017 - How do you handle a polar bear covered in oil? That was just one aspect of the annual Mutual Aid Deployment exercise last month on Alaska’s North Slope oil field.

Staff members from our Emergency Response Division and the Assessment and Restoration Division as well as other NOAA offices participated in the three-day exercise. Each year government agencies, oil companies, and oil spill removal organizations in the region work together to respond to a simulated oil spill in Alaska.

The scenario for this year’s drill was the simulation of an oil pipeline leak in the Beaufort Sea and the rescue of an oiled polar bear. In the exercise, the pipeline that was leaking belonged to Hilcorp, Alaska LLC. It was the first year the oil company hosted the event.

In addition to our office, participants included:

Staff from the Assessment and Restoration Division led the Natural Resource Damage Assessment component of the drill, that included a tabletop exercise with representatives from the state and federal agencies, and staff from Hilcorp. One Damage Assessment liaison was at the Endicott facility and the rest of the team participated remotely from Anchorage. The drill provided an opportunity to practice how a natural resource damage assessment would work with response early in a spill situation.

NOAA provides scientific support to the Coast Guard during oil and chemical spills, and the tools we’ve developed are an extension of that support. During the exercise, our GNOME trajectory-forecasting tool kept participants updated on where the spilled oil could go.

Arctic ERMA®, our online Environmental Response Management Application, was continuously being updated with information on where the oil was as well as the location all the responders and their equipment. Environmental Sensitivity Index maps, which identify vulnerable wildlife and habitat potentially at risk from the spill, were also displayed in ERMA. 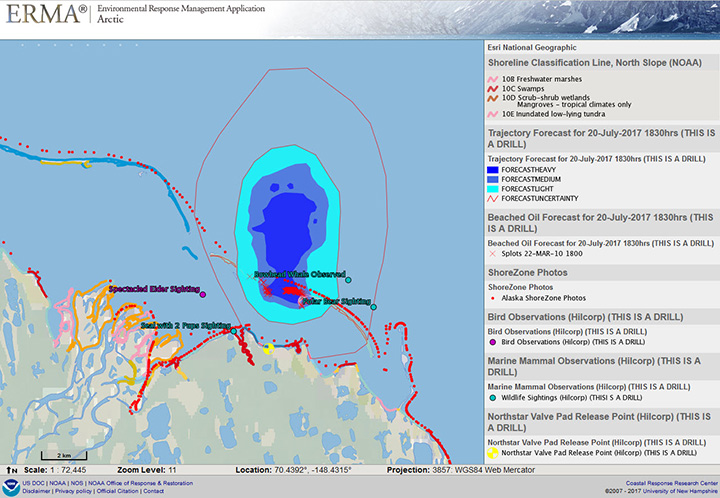 So how do you handle an oiled polar bear?

Very carefully and with a close eye on a timer.

Part of the drill was to see if an oil-injured polar bear could be tranquilized, pulled from the water, cleaned and caged before waking up.

Standing in for a real polar bear was an industrial-sized drum, filled with sand, covered with white cloth, and sporting a molded-foam head. The idea was to put the bear in the ocean and have emergency responders rescue the bear.

The rescue went well although some miscommunication early in the day added an unexpected element of realism—the team setting the fake bear in the lagoon did not anchor it, and due to heavy seas and winds on drill day, the bear drifted out into open water. However, the polar bear response team performed expertly and the fake bear was successfully located and rescued within the time allotted. 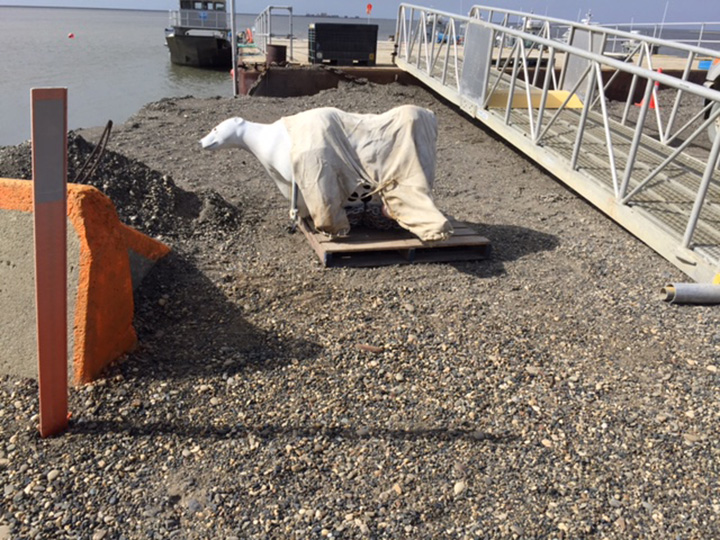 You can read more about other simulated oil (and oranges and rubber ducks) spills in these articles:

Zachary Winters-Staszak, Catherine Berg, and Sarah Allan of the Office of Response and Restoration contributed to this article.