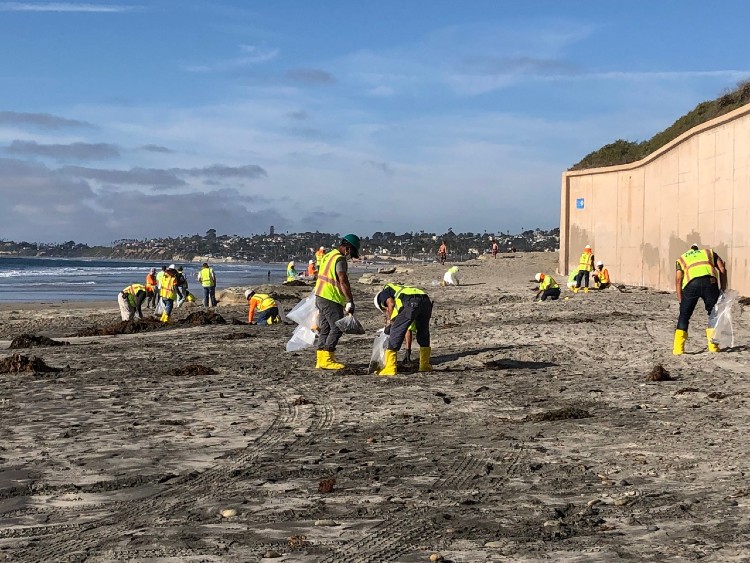 The Unified Command for this incident is now composed of representatives of the U.S. Coast Guard (USCG), California Department of Fish and Wildlife's Office of Spill Prevention and Response, County of Orange, County of San Diego, and Amplify Energy (the Responsible Party).

The incident has transitioned to a primarily virtual Incident Command Post and the Unified Command continues to meet multiple times daily.

Amplify Energy has secured the pipeline from leaking and is proceeding with assessment of the damaged areas of the pipeline to support repair planning, in close coordination with the Pipeline Hazardous Materials Safety Administration (PHMSA).

The spill amount is estimated as at least 24,696 gallons. This spill estimate was reached by consensus across seven agencies involved in the incident (USCG, PHMSA, California Department of Fish and Wildlife, NOAA, California State Lands, State Fire Marshal, and Bureau of Safety and Environmental Enforcement).

Since OR&R’s last update, the oil from this incident has continued to move southward and strand on San Diego beaches. The response team is investigating reports of tarballs reaching the Mexican shoreline and is coordinating with officials from the Mexican Navy.

The response team dealt with a forecasted weather event, including  rain, gusty winds, and high surf that passed through the area on Monday, Oct. 25. Operations were suspended on Monday afternoon due to unsafe conditions from the weather event, but resumed the next day. The storm brought a significant amount more oil and oiled wrack ashore.

The response continues to assess shorelines for the presence of tarballs and prescribes cleanup, as necessary. Throughout the area of response, shorelines remain in various stages of assessment, cleanup, inspection, and sign-off. In addition to responding to reports of tarballs, shorelines are being resurveyed after storms to identify whether tarballs have mobilized onto shorelines. At this time, no shorelines have been signed off by the Unified Command.

The public may encounter tarballs on San Diego and Orange County beaches. Because oil contains hazardous chemicals, do not attempt to touch/pick up any tarballs or oil. A tarball fact sheet is available for more information. If you observe oil on the shoreline, please email tarballreports@wildlife.ca.gov or use the “Report Tarballs” button on the Joint Information Center website.

Several of the county’s beaches are now being evaluated for sign-off. The following is a brief description of the sign-off process for shoreline segments:

The Sign-off Team is generally composed of representatives from the appropriate agency(ies) and the Responsible Party, usually the SCAT team and the local land manager(s).

When the SCAT Team agrees that a shoreline segment requires no further treatment (NFT), the team reports its recommendation for sign-off.  At that point, the segment enters a specific monitoring process which includes an initial inspection, then a 72-hour hold period, after which a Sign-off Team will return for a second inspection to determine if the segment continued to meet previously established cleanup endpoints.

If endpoints are met, the team will recommend the segment for final approval by the Unified Command and move it out of response.

As part of the SCAT team—and using OR&R’s recently published Job Aid for use of uncrewed aircraft systems (UAS) for spill response—OR&R scientists used a UAS to capture high resolution photos and create orthomosaic images of the coastal wetlands and embayments in San Diego County. The tool was particularly effective because it allowed the responders to assess sensitive marsh habitats and difficult-to-reach shorelines through remote sensing, rather than risking damage to the habitats through physical presence.

When oil first was observed on Huntington Beach, the beach was in an “accretion” phase (sand was being deposited), so some oil was buried in the first tidal cycles. It remained there until storms started to erode the shoreline and expose the buried oil on a small area of beach. Cleanup crews are cleaning the exposed oil.

Samples of collected tarballs were transferred to U.S. Coast Guard custody. OR&R will be among several agencies/laboratories analyzing the chemical composition of the tarballs to determine if they are associated with this incident.

The initial injury assessment has begun for this incident’s Natural Resource Damage Assessment (NRDA)—a process to determine how natural and human-use resources were injured by pollution and what restoration may be needed.

The NRDA team is collecting samples of sediment, water, biota (e.g. invertebrates and fish), and documenting oil presence/absence to begin to assess what the injuries may be to natural resources of the beaches, water column, nearshore, marshes, rocky shores and subtidal habitats.

Important to this incident will be the economic/human-use impacts (e.g., closed beaches, marinas, fisheries) and how those impacts affect the public. Activities underway include daily surveys to document beach use post-spill. 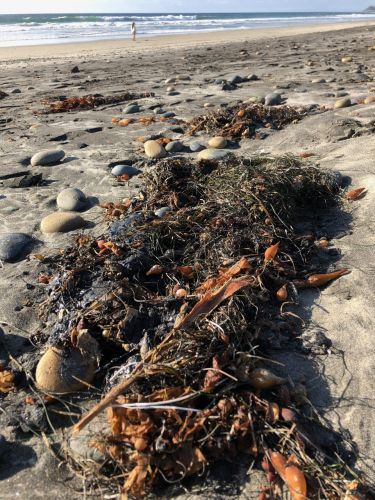 The Public Health Assessment Unit (PHAU) updated its report on San Diego County to reflect the results of sampling. Based on the air, water, and sediment samples collected and analyzed during the oil spill, the PHAU determined that San Diego County air, water, and sediment do not pose a public health concern for short-term exposures from use of its water and beaches.

The PHAU’s determination does not cover fishing and harvesting activities. (See Fisheries Closures and Seafood Safety, below.)

A state-imposed fisheries closure remains in effect, which prohibits the catch and consumption of any and all fish and shellfish within the area of the closure. Fisheries closure information and a closure map are available on the spill’s Joint Information Center website.

NOAA is not involved in fisheries closure or seafood safety issues for this incident.

The Oiled Wildlife Care Network is continuing to respond to reports of oiled wildlife. Both oiled and unoiled wildlife have been recovered, with some being rehabilitated and released. A bird release is  planned for Friday, Oct. 29.

A comprehensive list of species and daily updates on impacted wildlife recovered during response activities is available at the website of the Oiled Wildlife Care Network at the University of California-Davis.

A comprehensive COVID-19 plan and protocols continue to be implemented. for both field operations and Incident Command Post personnel.

Other Reports about this Incident