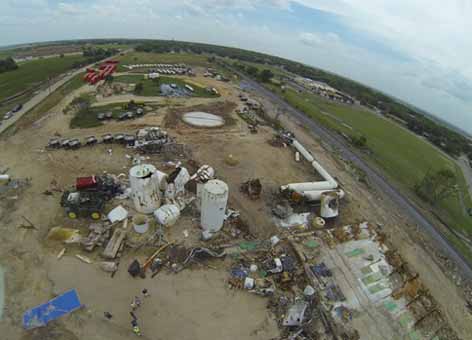 Surveying the destruction after the April 2013 explosion at the West Fertilizer Company in West, Texas. NOAA and EPA's CAMEO software programs help prepare responders to plan for and respond to chemical accidents such as this. (U.S. Chemical Safety Board)

NOVEMBER 6, 2014 -- On April 17, 2013, in the farming community of West, Texas, the storage and distribution facility of West Fertilizer Company caught fire. As firefighters attempted to douse the flames, tons of ammonium nitrate stored at the facility detonated, resulting in an explosion [warning*] packed with the force of a small earthquake. The blast killed fifteen people, injured more than 300, and damaged or destroyed more than 150 buildings.

Just two months later, on June 13, disaster struck again—this time at one of 12 chemical plants along a 10-mile stretch of the Mississippi River. In the industrial town of Geismar, Louisiana, the Williams Olefins chemical facility exploded and caught fire, killing two workers and injuring at least 75 others. The blast sent a huge fireball and column of smoke into the air. Fueled by the petrochemical propylene, the fire burned for more than three hours. Authorities ordered residents to remain indoors for hours to avoid the billowing smoke. 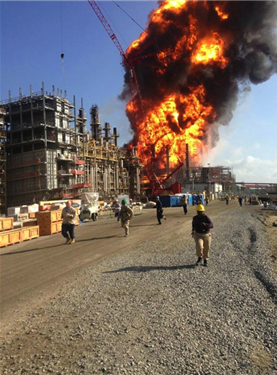 The fireball resulting from an explosion at the Williams Olefins chemical facility in Geismar, Louisiana, in June 2013. (U.S. Chemical Safety Board)

Getting Information into the Right Hands Before an Emergency

One of the challenges in preventing disasters such as these is to ensure that critical information gets into the planning cycle, and into the hands of the local emergency planning and responder community. To reduce the likelihood of chemical disasters in the United States, Congress has imposed requirements for governments, tribes, and industry.

For example, the Emergency Planning and Community Right-to-Know Act (EPCRA) of 1986 was created to help communities plan for emergencies involving hazardous substances. EPCRA requires federal, state, and local governments; Indian tribes; and the chemical industry to plan for hazardous chemical emergencies. It also requires industry to report on the storage, use, and releases of hazardous chemicals to federal, state, and local governments.

NOAA's CAMEO software suite, jointly developed since 1987 with the U.S. Environmental Protection Agency's Office of Emergency Management, is a key tool in the implementation of EPCRA. CAMEO is a suite of software tools used to plan for and respond to chemical emergencies. Developed to assist front-line chemical emergency planners and responders, CAMEO can access, store, and evaluate information critical for developing emergency plans, such as locations of hazardous chemical storage and nearby hospitals, schools, and other at-risk population centers.

From the Desk of the President

After the two major chemical disasters of 2013, President Obama signed Executive Order 13650 (EO 13650) to improve the safety and security of chemical facilities and to reduce the risks of hazardous chemicals to workers and communities.

In addition to several other provisions, this executive order established a senior work group from six different departments and agencies, including the EPA, all of whom are responsible for chemical facility safety and security. In a report released June 6, 2014 [PDF], this work group identified specific actions for the agencies to take, and directly called out enhancements to the CAMEO suite to help address chemical facility safety and security.

A Safer Future Is a More Mobile-Friendly One

Because the executive order specifies that the changes in CAMEO be completed by the end of fiscal year 2016, our office and our EPA partner are crafting a two-year plan for CAMEO. Here are a couple of examples of the work we have ahead.

To ensure broad access to critical chemical information for emergency planners and responders, we will be adding new standards—the Department of Homeland Security's Chemical Facility Anti-Terrorism Standards—to the regulatory section on our chemical datasheets, which already includes information from EPCRA, the Clean Air Act, and other regulations. This addition will help provide a linkage between regulatory programs.

Another recommendation is that chemical facility data reported under EPCRA be easier for emergency responders and planners to access. As a result, we and our partners will review plans for providing online access to this data via mobile applications. Currently, our CAMEO software programs are mostly stand-alone, computer desktop applications.

To expand offline access to emergency response information for people working in the field, we plan to add a mobile app version of our chemical database tool CAMEO Chemicals, which will have all of the program's data loaded onto an individual's smartphone. This will be in addition to the desktop, website, and mobile website versions of CAMEO Chemicals already available.

To maximize access to our chemical plume modeling program, ALOHA, we will make an Internet browser-based ALOHA program that is available as both a website and a desktop application. In addition, we will completely redesign the CAMEO data management program, CAMEOfm, which includes creating a supplemental CAMEO mobile application for viewing the EPCRA data from the linked desktop program.

Chemical accidents are infrequent, and through work like this, we hope to keep them—and their impacts—that way.

*The video and audio recording of the explosion linked to here may be disturbing to some audiences.