Jim has not finished his work with ALOHA for this scenario. He knows that ethyl mercaptan has a very strong, unpleasant odor and that people may associate it with a gas leak. He also knows that during previous incidents, people have become very concerned when they smelled a spilled chemical. Jim would like to estimate the area where people might smell ethyl mercaptan vapors—even when chemical concentrations are well below toxic levels. Within this "phone call zone," people may call emergency services for information, report to local hospitals, or—in this case—call to report a gas leak. Jim wants to account for this possibility in his decision-making.

Actually, since odor thresholds are so imprecise, researchers normally report them as ranges rather than exact numbers (check Table 1, below, to see that these ranges can be very wide for some chemicals). Jim decides to use each value as an LOC to model threat zones that would approximate the phone call zones for each odor threshold.

Because the information about the release has already been entered into ALOHA (step 1), Jim only needs to modify the LOCs and redisplay the threat zone estimate. To do this, he begins by selecting "Threat Zone" again from the Display menu. He chooses the "Toxic Area of Vapor Cloud" option, and then the Toxic Level of Concern dialog box appears again with the AEGL defaults selected. In the Yellow Threat Zone LOC pulldown list, Jim selects "User specified", types in 0.00014 in the box that appears, and then selects ppm units. In the Orange Threat Zone LOC pulldown list, he also selects "User specified", and then specifies 0.001 ppm. For the Red Threat Zone LOC, Jim chooses "none" in the pulldown list. After he clicks "OK", he sees the following threat zone estimate. 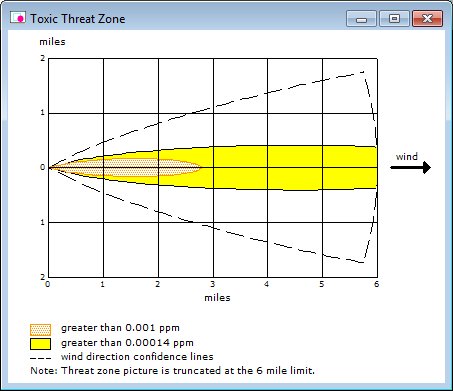 He sees that ALOHA predicts that the phone call zone for the CHRIS Manual value (orange zone) could extend for more than 2 miles downwind, and that the zone for the AEGL Level of Distinct Odor Awareness value (yellow zone) extends more than 6 miles downwind. (The sharp edge on the end of the yellow threat zone is because ALOHA will not estimate threat zones beyond 6 miles—for more information on this restriction, refer to the ALOHA FAQs.)

In the case of either odor threshold value, the threat zone prediction suggests to Jim that widespread public concern could develop in Oceanside City, if the vessel were to dock at the port. Again, he bears in mind the fact that these threat zones are just a ballpark estimate of the real area where people may detect ethyl mercaptan. People with especially sensitive noses may detect ethyl mercaptan's odor at distances farther from the vessel than the threat zones indicate. Others (with poorer senses of smell) may not detect the odor even if they are well within the areas covered by the threat zones. Still, Jim is glad to have at least a general idea of the extent of the area where public anxiety could be high.

Go back to the Ask Dr. ALOHA overview.