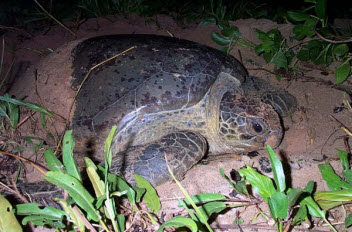 Oil and Sea Turtles presents a basic overview of sea turtle biology, summarizes what is known about the effects of oil on sea turtles, reviews potential response actions in the event of a release, and presents case histories from previous spills.

This guidance document is the third in a series of publications prepared by NOAA's Office of Response and Restoration to provide response-related information on specific warm-water resources. (Other publications in the series include Oil Spills in Coral Reefs and Oil Spills in Mangroves.)

Download the Guide: Oil and Sea Turtles: Biology, Planning, and Response [PDF, 7.0 MB]. Originally published in 2003 and reprinted in 2010, the report was updated in August 2021 to include enhanced knowledge from the response and Natural Resource Damage Assessment for the Deepwater Horizon oil spill.

Learn more about the spill incidents referenced in the report, Oil and Sea Turtles:

Fort Lauderdale, Florida, Mystery Spill: At approximately 10 am, August 8, 2000, NOAA was notified of a mystery oil spill washing up on the beaches from North Miami to Pompano, spanning approximately 25 miles of the east coast of Florida.

Oil Tanker SS Witwater: On December 13, 1968, the oil tanker Witwater broke up in heavy seas off the Atlantic coast of Panama.

Ixtoc I Well Blowout: On June 3, 1979, the 2-mile deep exploratory well, IXTOC I, blew out in the Bahia de Campeche, 600 miles south of Texas in the Gulf of Mexico.

Nowruz Oil Spill: In 1983, the Nowruz Oil Field in the Persian Gulf, Iran, was involved in a number of oil pollution incidents.

Barge Bouchard B155: On August 10, 1993, the freighter Balsa 37, the barge Ocean 255, and the barge Bouchard 155 collided in the shipping channel west of the Skyway Sunshine Bridge south of Mullet Key in Tampa Bay, Florida.

Oil Spill Case Histories: 1967 through 1991 [PDF, 1.7 MB]: This document summarizes significant U.S. and international spills between 1967 and 1991. In the Bookmarks section on the left, click the name of a spill: Alvenus, IXTOC I, Nowruz Oil Field, Vista Bella, and Witwater.