The Assessment and Restoration Division (ARD) of the Office of Response and Restoration is responsible for evaluating and restoring coastal and estuarine habitats damaged by hazardous waste releases, oil spills, and vessel groundings. Working with partners, ARD determines the harm to the environment and defines the amount of environmental restoration required to compensate the public for those impacts. 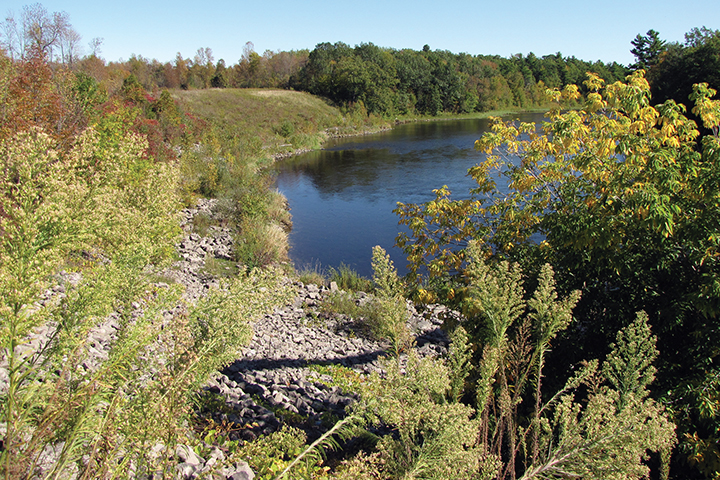 Restoration projects for the St. Lawrence River environment will benefit natural and cultural resources as well as increase the public’s ability to boat, fish, and view wildlife. (NOAA)

In 2013, ARD and its partners generated more than $30 million for environmental restoration through eight legal settlements in eight states. Among these was a $19.4 million settlement with Alcoa Inc. and Reynolds Metals Company for the St. Lawrence River in New York. These funds will be used to restore injured natural resources, Saint Regis Mohawk tribal culture, and access to recreational fishing in northern New York. These injuries occurred when aluminum manufacturing plants released hazardous substances into the St. Lawrence River environment near Massena, N.Y., and adjacent Mohawk lands.

The Office of Response and Restoration, through NOAA's Damage Assessment, Remediation, and Restoration Program, worked with natural resource co-trustees on a Natural Resource Damage Assessment to determine injury to the environment, reach the settlement, and develop a restoration plan. The trustees will continue collaborating on projects to protect and restore the iconic St. Lawrence River environment. Projects include acquiring land; restoring or enhancing wetlands, uplands, streambanks, and fisheries; creating and funding programs that promote Mohawk culture and language; and constructing and upgrading shoreline and boat access to fishing.

ARD has made considerable progress working with the rest of NOAA and other federal and state agencies to investigate environmental damages and plan restoration following the 2010 Deepwater Horizon oil spill.

At the end of 2012, the natural resource trustees, acting on behalf of the public, finalized plans for two additional early restoration projects intended to restore habitat for sea turtles and beach-nesting birds impacted by spill response activities. Totaling about $9 million, these projects will be spread across multiple sites in the Florida Panhandle, Alabama, and Mississippi.

Building on this momentum, in May 2013 the trustees announced plans for $600 million in new early restoration projects. The public will be able to weigh in on the 27 proposed projects in a draft early restoration plan anticipated for release late in 2013. NOAA funding and expertise will play key roles in several of the projects, including major barrier island restoration in Louisiana; shoreline erosion control in Florida, Alabama, and Mississippi; and artificial reefs in Texas.

Damage assessment activities have been advancing as well. As of September 2013, NOAA teams have collected more than 60,000 environmental samples, surveyed 4,200 linear miles of shoreline (many miles multiple times) and taken part in nearly 100 offshore science cruises—all record levels for a case of this type.

In preparation for the many logistical, scientific, and cultural challenges of conducting oil spill response and environmental damage assessment in the Arctic, ARD took a number of actions to strengthen relationships with Arctic communities and continued to develop and improve scientific tools and methods for the region. 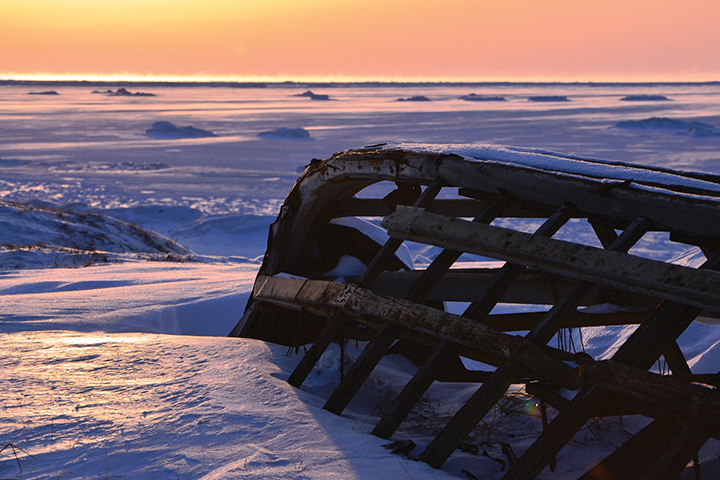 The unique and often harsh environment found in the coastal village of Wainwright, Alaska, illustrates the challenges of conducting oil spill response and environmental restoration in the Arctic. (NOAA)

This past year, ARD hosted workshops with representatives from Alaska's North Slope Borough villages and the Inuvialuit (western Canadian Arctic) region. These initial discussions acknowledged indigenous peoples' reliance on and reverence for the natural, subsistence, and cultural resources in the Arctic—and explored how NOAA would be able to evaluate those connections if an oil spill interfered with them.

At these workshops, the Environmental Response Management Application (ERMA®) was demonstrated to communities as a tool they can use to share local knowledge. Arctic ERMA is OR&R's online mapping tool that delivers data to emergency responders and environmental resource managers dealing with environmental disasters in the Arctic region. Conversations with these communities helped identify ways the tool can be enhanced for spill response and restoration.

In addition, ARD developed a stand-alone version of Arctic ERMA, allowing it to operate without Internet access—a critical feature for oil spill response in remote areas. This year NOAA and Environment Canada also developed a formal Memorandum of Understanding to strengthen exchange of Arctic data, which will be made available in Arctic ERMA. 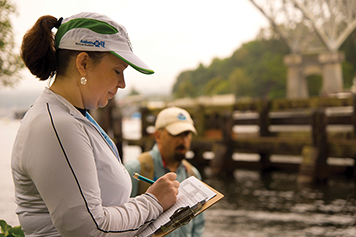 Preparing for the next spill, Assessment and Restoration Division scientists are constantly discussing how to improve methods of determining injuries to the environment. (NOAA)

Atlantic ERMA, OR&R's online mapping tool for the mid-Atlantic coast north to New York, was put to the test in the aftermath of Post Tropical Cyclone Sandy in November 2012.

Designated as the Common Operational Picture for the U.S. Coast Guard's pollution response to Sandy, ERMA provided responders across multiple command posts and field teams with up-to-date information to facilitate assessment and cleanup of spilled hazardous waste and other pollutants. Data made available in ERMA included identified pollution sources, remote sensing imagery, field and overflight photos, major response operations, and locations of sensitive natural resources. In the future, Atlantic ERMA will continue to support ongoing environmental remediation and restoration activities throughout this region.

In the week after the storm, ARD's damage assessment staff began collecting data on impacts to natural resources, especially affected coastal habitats, and coordinating with state and federal co-trustees to determine whether to pursue a Natural Resource Damage Assessment and implement environmental restoration. As a result, a cooperative settlement was reached with Motiva for the release of oil from its Sewaren, N.J., refinery during the storm, providing funds to restore and monitor recovery of tidal wetlands in the surrounding Arthur Kill watershed.

In September of 2013, OR&R launched a new online mapping tool for the Great Lakes that will give regional decision makers, resource managers, and environmental responders better information as they clean up hazardous materials and restore coastal environments.

ERMA for the Great Lakes features the most comprehensive collection of environmental contaminant data for the region, as well as information on natural resources, habitats, weather, and currents.